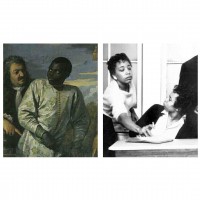 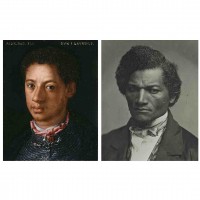 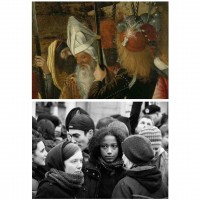 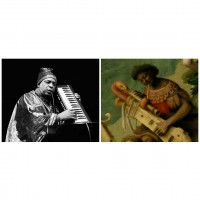 In Five Ways of Being a Painting, historian William Max Nelson writes: “Like any good aphorism, the short sentence functions as both a part and a whole. At first, it seems to make sense in isolation, yet it calls out for placement within a context that could reveal some fuller meaning. "
The property that Nelson describes in the brilliant essay does not belong only to the aphorism. This synecdochial property also belongs to the image. Like the maxim, in fact, the image is always situated in a context (taxonomic and / or compositional). It never lives in a vacuum and this intrinsic nature consistently places it in relation to others.
Overcoming distances in time and space, the image thus create a visual dialogue. A dialogue capable of detecting latent meanings, which reveal themselves to the eye of the observer who does not grasp the images as “faits accomplis” (Ariella Azoulay). Such is the reflection that this photo essay intends to make evident. Drawing upon the Gallerie degli Uffizi’s Hypervisions exhibition On Being Present: Recovering Blackness in the Uffizi Galleries as a point of reference and departure this series reveals a range of echoes and agreements.

Consider, for example, the diptych that brings into conversation a detail of Portrait of Four Servants of the Medici Court by Anton Domenico Gabbiani , and the photo by Eve Arnold. The two images rhyme with each other. An intrinsic rhyme that recalls how much the black body, on diasporic soil, is persistently held in a penetrating and morbid gaze. One that categorizes the Black subject as “Other”. (The woman standing in the photo is training the young activist not to react to police provocations.)
This gaze frames, and at the same time strips. It strips the black subject of its sense of self. A self that in turn tries to recover, and reconstruct, through the practice of the photographic portrait. Frederick Douglass deeply understood this revolutionary power of photography. For him, in fact, as Shawn Michelle Smith recalls, photography "does not reflect but makes the self." A creation that, until the advent of photography, was reserved only for nobility. (“The humblest servant girl may now possess a picture of herself such as the wealth of kings could not purchase fifty years ago,” Douglass said in 1861.)
But photography does not just create. The photograph attests. It bears witness to presences, which the aforementioned gaze transforms into absences. This other power of the medium prompted Johny Pitts to portray the Plack presence in Europe. This is a presence that many consider a novelty. But paintings like Carpaccio's Gli Alabardieri testify to the contrary.
And now, the last diptych. Two musicians in agreement. An assonance that reminds us how much the interaction with images is not only visual, but also auditory. A synaesthetic encounter that recalls the invitation made by Tina M. Campt: “listening to images.”

Echoes and Agreements:
Examining the question of otherness and racial hierarchy, Echoes and Agreements is a series of diptychs that pair canonical European paintings with photographs hailing from the Black diaspora. Initiated as an experimental work on social media, the series offers alternative ways of reading images. In isolation from their original context, the images in each diptych accrue meaning as they comment on one another. This series of images was created as a dialogue with the virtual exhibition On Being Present curated by Justin Randolph Thompson for the Gallerie degli Uffizi’s Hypervisions collection Viewable here: https://www.uffizi.it/en/online-exhibitions/on-being-present .

Short bio:
Theophilus Marboah has been trained in medicine and surgery at the University of Pavia, Italy. Alongside his medical education, he has cultivated a profound interest in African Diaspora studies and visual cultural studies, with a special focus on contemporary African and African Diaspora art. His attention to Black visual arts has produced Echi e Accordi (Echoes and Agreements), a digital series that has been the subject of academic interest.